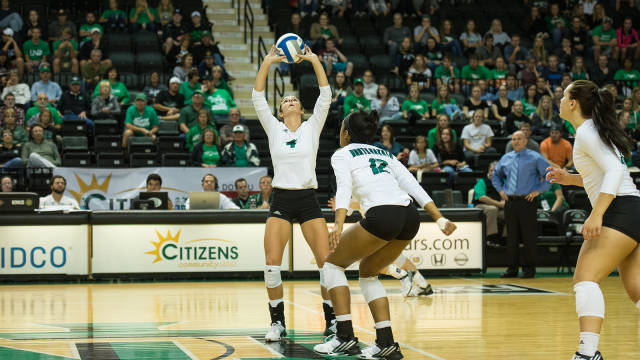 In front of a loud 1,319 fans at the Betty Englestad Sioux Center, the University of North Dakota Fighting Hawks used a balanced attack to defeat the University of Northern Colorado Bears in four sets (25-19,25-19,23-25,25-19) to secure the second seed in their final Big Sky Conference Tournament. UND will compete in the Summit League next season.

The Fighting Hawks finished the regular season 12-4 in the Big Sky Conference and now have to prepare to fight for a return trip to the NCAA Tournament on the campus of Sacramento State next weekend.

Today, UND was able to successfully utilize an outstanding effort from senior Sydney Griffin on defense who contributed 22 digs and 42 assists to the effort.The senior came a mere five kills from a triple-double.

UND now heads into next week with a chance to break down film, study its potential opponents in the tournament, utilize its first-round bye, and go for its second NCAA Tournament appearance in two years.

Coach Pryor also reached 100 wins in his UND career today. During his postgame talk with the media, he focused on UND being mentally ready for next week. He feels that the Fighting Hawks have a “puncher’s chance” next week.

If  UND can play their game and limit errors, they most certainly do.