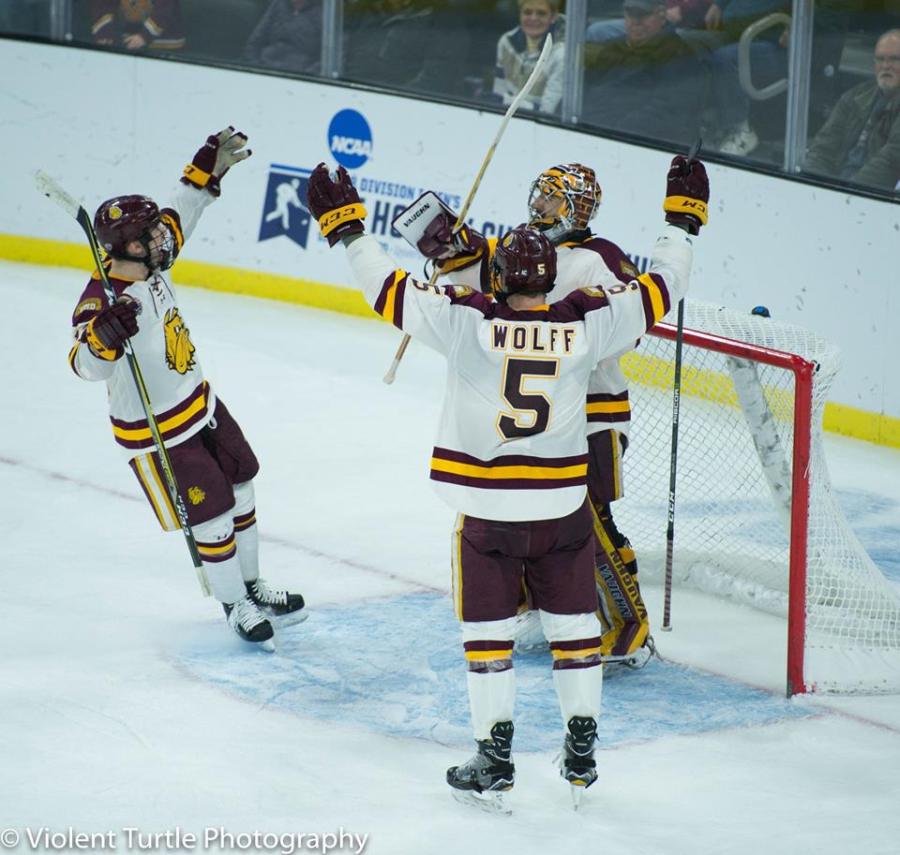 In front of 8,015 screaming fans at the Denny Sanford Premier Center in Sioux Falls, South Dakota,  the University of Minnesota Duluth Bulldogs used a dominant first period against the Air Force Falcons to earn a return trip to the Frozen Four.

The Bulldogs won 2-1 thanks to goals from Joey Anderson and Nick Wolff. Duluth goalie Hunter Shepard chipped in 11 saves on 12 shots in the last two periods.

Coming into the game, the University of Minnesota Duluth needed to use its speed combined with its physicality to capitalize on its chances. They were able to hold Air Force without a shot for the first 23:56 of the game. UMD dominated in all three zones and did not give Air Force any time or space to create much offense for the first half of the game. The Bulldogs did not wait too long to open up the scoring as 9:03 into the first period, Joey Anderson took a perfect rebound from a Riley Tufte shot and backhanded it into a wide open net past Air Force goalie Billy Christopoulos.

Just over three minutes later, Nick Wolff scored on the 10th UMD shot of the game past Christopoulos who was at the top of the crease.He took a feed from Jade Miller and did not miss his chance 12:12 into the first period.

Air Force Head Coach Frank Serratore summed up the first period best: ” Duluth came out and they took us to the woodshed in that first period in a big-time way… we hadn’t seen speed like that all year.”

Air Force did not record a single shot on net during the first twenty minutes.  One interesting thing that precipitated the change in momentum was the Air Force forecheck. Until the second goal was scored they attacked Duluth with two forecheckers at all times instead of one. The Bulldogs made them pay and converted on their chances.

Once the Falcons changed to one forechecking forward, the game tightened up and swung in Air Force’s favor.

It took until 16:04 remained on the clock in the second for Air Force to record a shot. Air Force got its first six shots of the game during the second period. The Falcons had the better of play for most of the second, and controlled the pace a lot more during the period but could not score.

In the third period the Falcons finally broke through. 13:44 into the final frame, Evan Giesler banked a puck off UMD goalie Hunter Shepard from behind the goal line on the power play to make it a one goal game and provide the final margin.

For the last few minutes of the game the pace was fast and furious mostly in the UMD defensive zone. The Bulldogs were able to do just enough to advance to the Frozen Four in St. Paul where they will play the winner of Ohio State and Denver tomorrow.

Coach Serratore also summed up what Duluth’s opponent in two weeks will have to deal with: ” Whoever gets them in the Frozen Four, they’re going to have their hands full. ”

One final stat from tonight. Duluth was able to block 19 Air Force shot attempts tonight. Duluth blocked ten more shots than Air Force, and was able to keep their rebound chances limited thanks to their superb ability to clear pucks, and limit screens in front of Shepard.