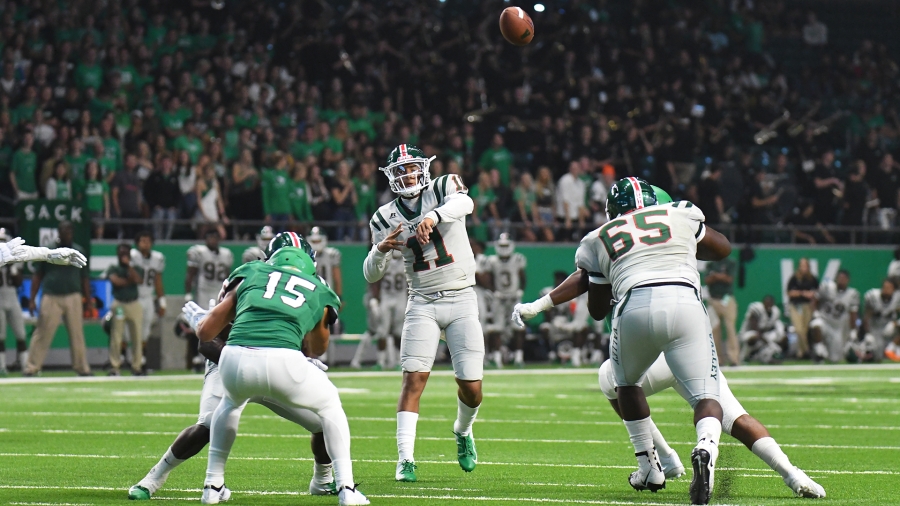 When I talked to Mississippi Valley State Delta Devils’ Head Coach Vincent Dancy a few weeks ago, he wanted to see what type of team he would have this season. Well the Delta Devils found out a few things about their team tonight in Grand Forks.

Despite the 35-7 final score, MVSU found that they can compete with the teams they play. Dancy, and starting quarterback Chris Fowler noted their ability to utilize their superb passing game to move the ball as needed. He finished the night 22-39 with 263 yards and a touchdown pass to Demarcu Fraizer. The senior corps of wideouts for the Delta Devils will be their strength on offense this season,They made play after play tonight and did not drop a ball.

Fowler’s ability to find Frazier, Booker Chambers, and Quinn McElfresh among others will determine a lot about the 2018 Delta Devils and their performance in the SWAC. Chambers impressed me with his ability to create big plays both in the slot and in special teams. He finished the night with 150 total all purpose yards.

Head Coach Dancy noted some more things. The Delta Devils left according to him 17 points on the board as they gave up a fumble on the UND goal line, a missed 29 yard field goal, and not being able to punch in the best kick return of the night from Booker Chambers which only went for 79 yards. In addition, the Delta Devils played a tough game on defense and forced UND to run the ball frequently. Despite the final statistics, they do not tell the entire story for this team. While UND was able to move the ball, Coach Dancy’s defense forced some mistakes and made UND make plays to beat them. UND is one of the toughest teams MVSU will play this season. For Coach Dancy to take this team in his first game as their leader, and help keep them in it through three quarters and competitive throughout should leave MVSU fans with hope for the future of the Dancy Era.

One thing that stood out to me was at the end of the game. From the press box it looked like Fowler was motioning for the punt team to stay off the field to punt to UND to end the game. The team still punted but the body language of the Delta Devils showed me something tonight. This team traveled across the country to open up another season in North Dakota and handled themselves well. They played a team with a superb pass rush, running back trio, and talented wideouts just to name a few of their high-skilled areas, and hung with them.

MVSU still has things to work on this week, of course, if they can convert on half of their chances that they create they will be in more games in SWAC play and beyond. This bodes well for the future of what Dancy wants to do. He has instilled a complete culture of competition and 100 percent energy as a basic expectation in Itta Bena. As Fowler said of Dancy, “he treats us like champions.”  That showed in every aspect of how the Delta Devils warmed up and played tonight. If the MVSU that went five for seven in converting third downs in the first half can repeat the things that drive them against Jacksonville State and beyond, then good things both this year and long term could await one of the most storied schools in the country regarding developing top-tier NFL talent.

2 thoughts on “35-7: How Tonight’s Score Does Not Tell the Whole Story for MVSU”