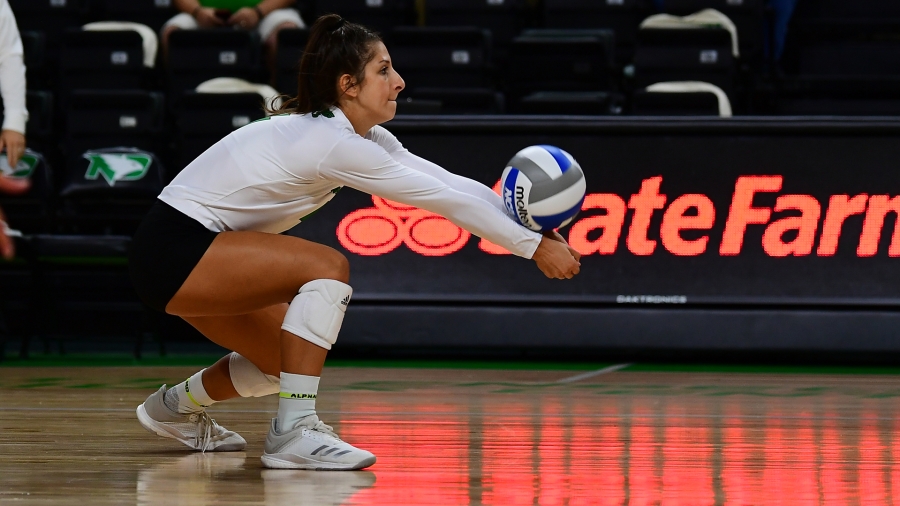 In front of 979 roaring fans at the Betty Engelstad Sioux Center the University of North Dakota Fighting Hawks defeated the South Dakota State University Jackrabbits 3-0 to take their third game in a row and on the week.With that win, the Fighting Hawks now move to 4-1 in Summit League play. Multiple Fighting Hawks played strong roles in today’s sweep. Taliyah Flores lead the defense with 15 kills. Jordan Vail lead the offense with 10 kills on 18 swings. Lydia Rutten was the most efficient attacker with more than 10 swings. She generated an error free 7 kills on 16 swings, good for a .438 clip on the day.

After the game, Head Coach Mark Pryor noted the challenge this game presented to UND. It was their third game since Wednesday, and second in less than 24 hours. He was pleased with UND’s ability to finish sets and hopes the Fighting Hawks can build on that ability to control games heading into next weekend. Next weekend, the Fighting Hawks have a split weekend. First, they play Nebraska Omaha on the road Friday, then come home to face another tough Summit League test as they take on preseason Summit League favorite, Denver, at home next Sunday.

In the first set, the Fighting Hawks had to overcome some adversity as SDSU got on the front foot early as they had to take a timeout down 10-7 in set one. From there on it was a back-and-forth set. Like the second set against Oral Roberts, they did give up a few set points. Unlike yesterday’s second set, they finished strong and took the first set 25-22. In the first set, Jordan Vail was the most efficient Fighting Hawk on offense getting five kills on six swings.

In the third and final set, UND was able to utilize another low error set with only four attack errors to take the set 25-20 and the match. The Fighting Hawks took the final set hitting .308.Another strong point of the set was UND limiting their swings. They took the third set with 26 swings while SDSU had 31. That, combined with six SDSU attack errors accounted for the quick third set. In the first three sets last night, UND had 20 attack errors. Today, the Fighting Hawks reduced that total by seven to finish the match with 13 attack errors. Limiting errors is a hallmark of when this team is playing well.

Today provided a strong formula to replicate for UND going forward. Limiting errors, and diverse distribution of chances for the offense help this team stay unpredictable and force teams to change their systems to react.All of that, combined with the continued development of Flores who has played quite well as a freshman libero and outside hitter averaging 4.62 digs per set coming into this matchup today all add up to a winning formula for the Fighting Hawks.