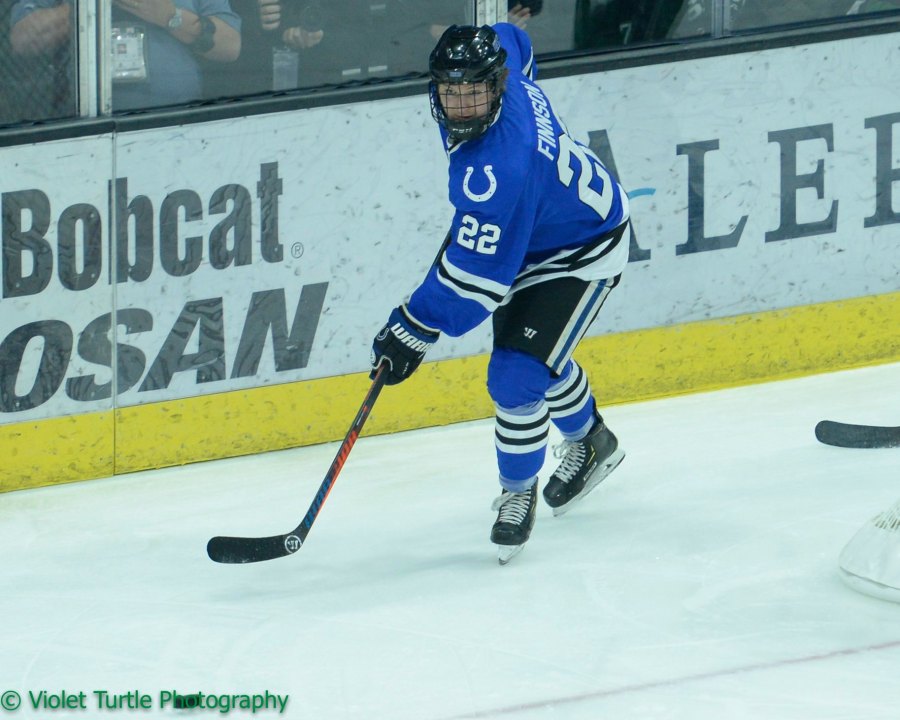 This afternoon, the Chargers of Alabama Huntsville went on the road to play the Wildcats of Northern Michigan. Coming into this one, UAH was facing a team that scored at least three goals in its past six games. Today, they faced a team that peppered David Fessenden with 36 shots. He stopped 35 of them, and often times made plays look easy due to using his big size, and his positioning, which was perfect for most of the game. Derek Krall made the last save, but Fessenden looks to be ok, and could be in the net starting tomorrow night. Head Coach Lance West wanted his team to play the right way and focus on the game, and they did both of those things pretty well.

Let’s go to the Chargers, and what they did well. First off, Tyrone Bronte’s line is a problem to defend. Fessenden said that Bauer Neudecker has the most deceptive shot on the team and he used it today to put home what would be an important insurance goal. He took a perfect pass from Connor Wood, and went far side and in to make it 3-0. As for Bronte, well, he opened up the scoring going down three-fourths of the ice and roofing a backhand before anyone could catch hm. Tyrone Bronte’s acceleration today was something to watch and behold, and it makes us question even more how he did not have any Division One offer until June. Oh, and his line also has an incredibly fast Quinn Green on it who has grown into a prominent top-end winger for this team as well.

The game today came down to who played the right way most often. While Northern Michigan won the shots on net by a large margin, they also allowed a higher percentage of attempts conceded on net unblocked. That is the Chargers put 16 shots on net, and put 10 wide, only having six attempts blocked. The Wildcats put 76 attempts towards the net, having 27 blocked with 10 wide, and two posts.

When it came to overall ability to compete for lose pucks tonight, the Chargers did a better job in the corners, winning puck battles and moving things towards offense in a much more efficient manner. Their transition game produced results on two of their goals, and the third from Josh Martin was a result of a battle in front of the net, and the shot finding a lane (it may have been deflected by Adrian Danchenko, but given that Martin went over 300 days without playing hockey, for now, it is Martin’s goal).

For the finale tomorrow night, the biggest thing UAH may want to adress is working to win a few more faceoffs, especially against the Joseph Nardi line. That group for the Wildcats can score quickly, and in bunches. Winning some more faceoffs can mute that to some degree. Tonight, the Chargers lost that battle 47-23. That has to improve tomorrow night. Look for there to be a few more tie-ups off the draw where the wings can step in and help win possession. Northern Michigan is plenty good enough without letting them win more faceoffs.

Donate: To help us cover more games and tell more stories not found elsewhere about all of college sports, especially under represented athletes everywhere across the college sports landscape like unique untold stories across college hockey. Please click the below link and consider donating what you can. If you do, I will list you in every story about we write as a supporter of crowd-funded  journalism that can truly be free for all at this link:paypal.me/Seamorepsorts