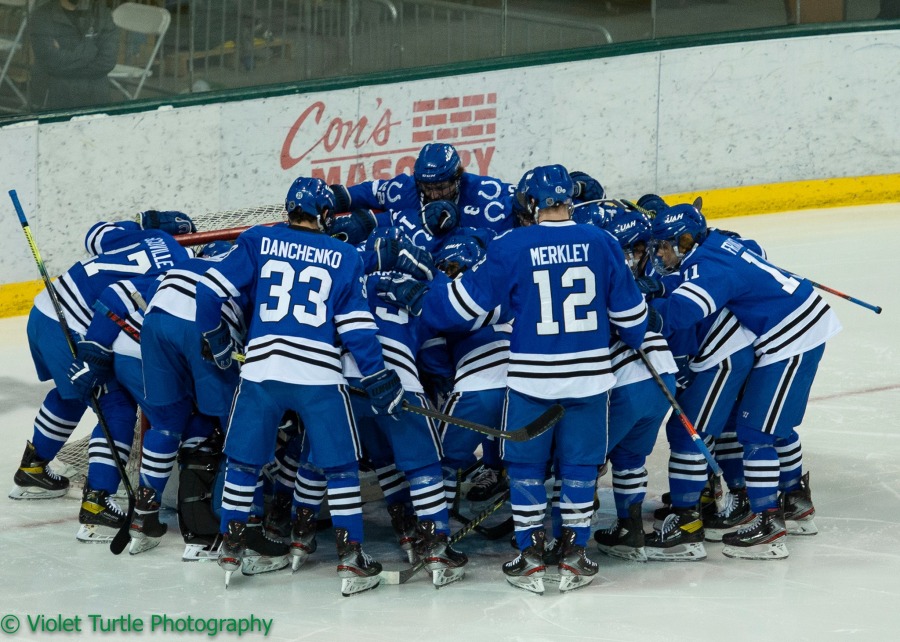 Well, Atlantic Hockey has found itself down to ten member schools for the upcoming season. While we of course want Robert Morris reinstated, the league finds itself at a crossroads. What is a league always looking to get more into the national conversation to do when one of its legacy members, due to a callous, myopic, short sighted, and ill-explained decision faces an uncertain future ? (in a perfect scenario, we want Huntsville admitted this month, along with Long Island, Robert Morris brought back, and a divisional play system established, identical in terms of idea to the pod setup a year ago, but with some cross pod play allowed, team alignments to be determined).

Well, the reality of the upcoming college hockey season could actually set what the members could do for them.

For the conference, if it wants to get bigger, which it has the opportunity to do, as it will be entertaining pitches from Alabama Huntsville. Long Island, and one other school in meetings this June, the Chargers’ pitch for this season has to have a renewed interest. In addition, given all of the reschedules due to the pandemic-marred season we just completed, most non conference schedules are set. For most teams to add another non conference weekend, they would need to travel, and risk not going on a revenue guarantee. If teams added another conference weekend, then some will still add travel costs, with no money coming back to them in return.

Despite suspending their season and, as of now, not participating in the 2021-2022 campaign, sources around the program do not see the suspension as a bar to participate. Should Atlantic Hockey change their course for this season (based on sources around the conference, it seemed clear that expansion, prior to the Robert Morris news for the 2021-2022 campaign seemed unrealistic). Given the history of Huntsville Hockey, finding a conference is the only way to go, and given the changing landscape of Atlantic Hockey, the Chargers’ pitch for this season allows the league’s members to travel to some of their games and get paid for them, adds a market with a strong fan base (despite winning only two games at home, the Chargers had the third highest average attendance in this weird just finished season, and in the 19-20 campaign, before many of their roster came to town, the team outdrew eight Atlantic Hockey teams from that year).

Given the large number of players in the transfer portal, the lack of players lost in it by the Chargers (David Fessenden and Tyrone Bronte), and the amount of junior hockey age-outs looking for a Division One home, the time for the Chargers very well could be this summer, if Atlantic Hockey wants to even maintain the number of teams that it competed with in the 20-21 campaign. The mere fact that this program got two transfers to come to it during the month before its suspension should show how Huntsville Hockey is viewed by other teams. Players do not get advice to come anywhere from other colleges if the coaches do not have a trust of what the other staff is doing. We remember how happy Dominick Procopio and Matthew Jennings were to be coming to Huntsville, for both, this team and this city represent a fresh start, and for Jennings, it allows his parents to see him play, every night.

From a conference view, the Chargers have the academic bona fides to join the conference, the financial backing of a network of donors led by Sheldon Wolitski and Taso Sofikitis, and a long term plan to build an on campus arena. Oh, and they also have a network that includes relationships with the Nashville Predators, a growing NHL profile through the exploits of their most famous alum, Cam Talbot, and the Nashville Market within their grasp. Oh, and the Chargers pitch remains on the table. Ten schools all have a chance to make money (25000 dollars per series) every time they play a series in Huntsville. Sean Henry, President of the Predators, has noted early discussions about marquee games at Bridgestone Arena with the Chargers. Perhaps starting a southern hockey challenge tournament with the Chargers, another Atlantic Hockey team, and two programs from other leagues each year, combined with a massive club tournament, could serve as a kickoff to the season for everyone, promote the game, and more.

In the long run for Atlantic Hockey, the Chargers have a solid reason to be in the program. Academically, they belong, as Huntsville’s engineering programs, and relationship with NASA make it a unique member of any conference it would be in. The town is called Rocket City for a reason. On the ice, the Chargers play a gritty game that relies on team tenacity to do well, which helps individuals thrive in the group, a style that teams at the top end of the conference play, as good as anyone in the country.