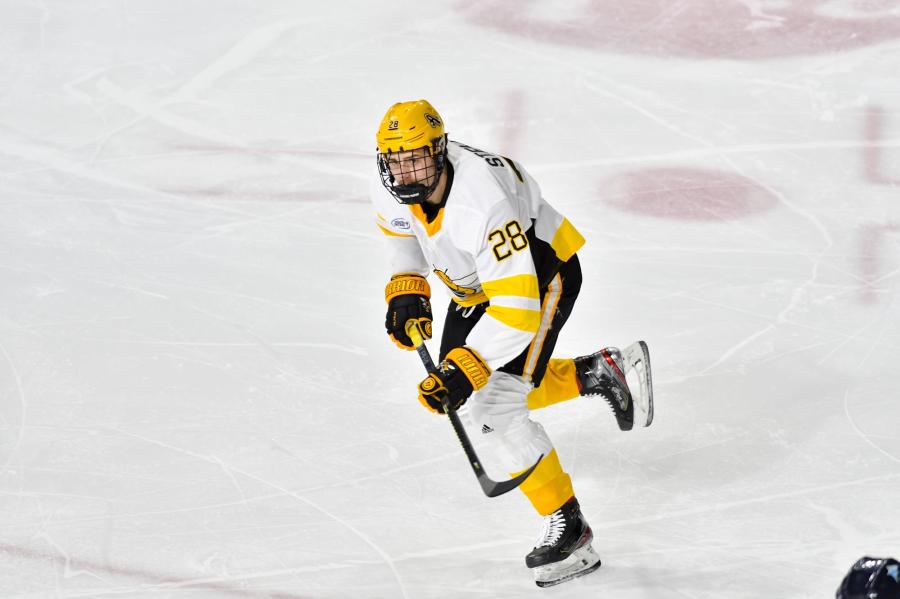 Coming into this game AIC had shown flashes of brilliance all year against non conference opponents, for a team with seven losses, they have been in all but one of their games, and know how to compete.

Tonight, they put everything together with a resounding 5-0 win. Jake Stella put home three goals, leading the way with the hat trick. This is the first hat trick for AIC since December 6.2019 when Tobias Fladeby put up three against Canisius. Chris Theodore, his linemate put up three assists and helped spur the offense. Jacke Kucharski put up a 33 save shutout and kept things calm the whole way.

On the night Stella said of the hat trick “ it’s always fun to score a lot of goals.. I couldn’t do it without my teammates.” Stella praised Chris Theodore for his distribution “ he’s a great player and an even better human being.” On specialty teams , Stella said of their sucess “ just keep it simple.” The team got two goals on four power play chances and killed all of the power plays faced.

On the night Head Coach Eric Lang said “ we were able to score some goals tonight which we were struggling to do as of late, we felt like we had a little more time and space tonight. Credit Bentley for a good push in the second period.”

On Stellas hat trick “ we say you get what you deserve.” He praised how prepared Jake is for everything he does and how big that preparation was in this hat trick.

On Theodores night “ he’s key for us.. he’s different in terms of anything else we have, there’s a home run hitter.” Theodore produces big results for this group.

Of the grit players who did not score any points he praised Austen Long and Aaron Grounds. Both of them played well and “ have a lot of good habits.”

He added that “they showed up and played like men.” Both impose their physical presence on a game when needed.

Ahead of the series finale Lang said that” I always feel you can’t be complacent after a win.” Lang expects to make some changes heading into the finale tomorrow.

Lang also added something On the relationship between Chris Dodero and Theodore Lang added that Dodero helped improved Theodores overall game and got him to be better. “ it’s the strength of our culture here , at the end of the day that’s one of the things you can be most proud of.”

Donate: To help us cover more games and tell more stories not found elsewhere about all of college sports, especially under represented athletes everywhere across the college sports landscape like unique untold stories across college hockey. Please click the below link and consider donating what you can. If you do, I will list you in every story about we write as a supporter of crowd-funded journalism that can truly be free for all at this link link:paypal.me/Seamorepsorts