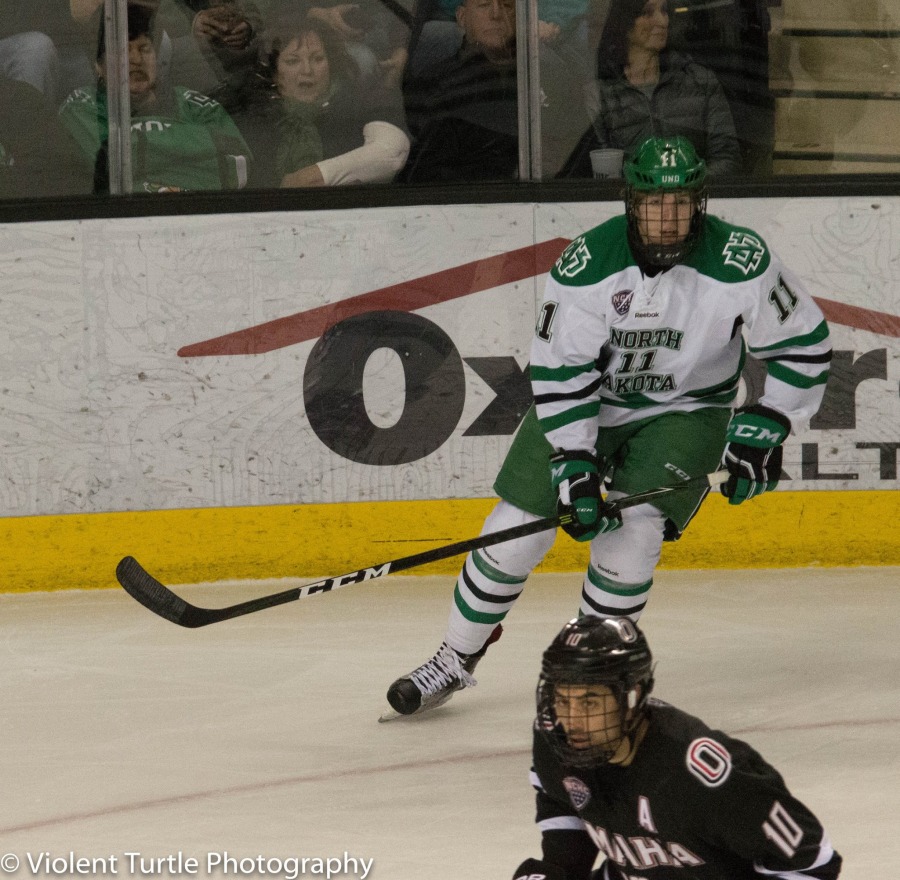 Trevor Olson is not who you think of when looking at this year’s University of North Dakota Men’s hockey team, big names like: Brock Boeser, Tyson Jost and Cam Johnson have taken up the spot light. March third that all changed when he scored not only a shorthanded goal but ended up being the go-ahead.  At this point, Olson season is flying high. 35 games played, Olson has 5 goals, 4 being game winners and 7 assists, near producing twice as many points this season than during the last two seasons, which he played 55 games. Olson will be returning to UND for his senior year in the fall and looking forward to the more mature version of the team. Olson said that “I think we got away from who we are as kids, we got a little frustrated,” this pretty much sums up what the season has been like.

Olson is a pretty laid back communications major and has been spending the spring semester as an intern with the UND hockey team. He has been writing a blog when the team is on the road called “Olson’s Eleven.” Every time you talk to him, he is smiling and laughing, I got a chance to sit down and have him reflect on his hockey career so far. Olson comes from a family of athletes. His brother played junior hockey for three years, sister plays college soccer and mom is a record holding basketball player and his dad played fast pitch softball. Coming from a family that has so many athletes, he would try and compete with them. When he went to juniors, he started to put less pressure on himself and just started to have fun.

Olson has always wanted to be a forward “I wanted to score goals!” The last two seasons, he has taken a back seat when it comes to putting points on the sheet but that doesn’t mean that he is not helping his line mates. Like most hockey players, Olson is humble. I asked him about being so “hot” right now and his response was “My line mates and teammates have made some great plays to help me find a little bit of scoring touch.”

Olson said that he must look at it like it is his job when he goes to the rink every day it’s not “I am going to try to be the best, it’s I will be the best.” Coming to UND was not a hard decision for him. During his visit, he met with Head Coach at the time Dave Hakstol, who told him he was going to have to work for his spot but they wanted to give him a chance. “Hak is my best friend. I love that guy!” but with Hakstol leaving at the end of the 2014-2015 season Olson had to overcome a new challenge impressing incoming head coach Brad Berry. Hakstol and Berry have very different coaching styles. The biggest difference is that Hakstol is intimidating and if you screwed up in practice you would know it. Berry is more comforting Olson said “He’ll give you crap but he is not going to lay it on you” Now as the team tries to make history again by bring home two national championships in back to back seasons, Berry says “We have more boxes to check and every weekend we get one more box checked off.” The Hawks are far from being out of the run and are looking forward to taking on rivalry Denver on Friday (3/17) at the Target Center.

I could not end this any better than with Olson’s own words:

“There is a reason why we are all here, just be yourself, play the game how you know how to play. That’s how to make dreams happen!”