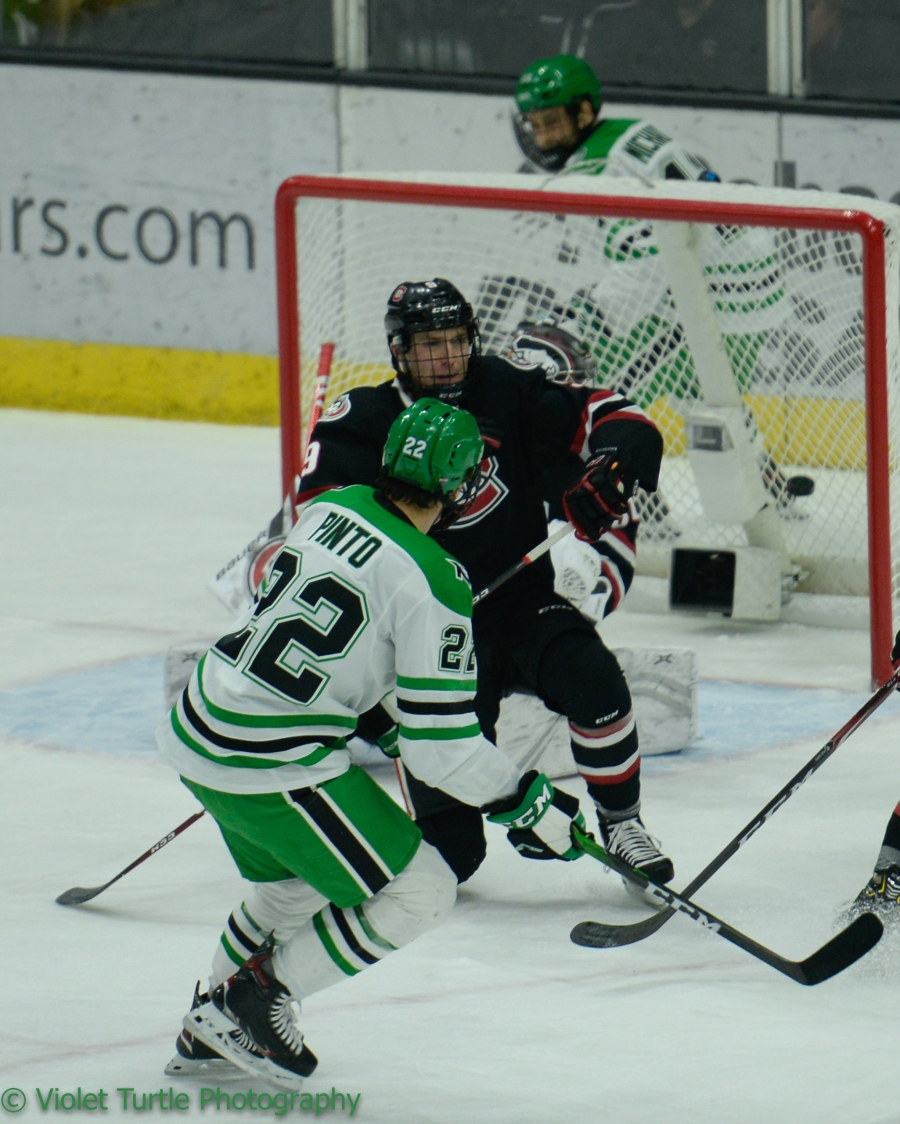 After a wonderful series in Denver where the Fighting Hawks Men’s Hockey Team took five of six possible points from the Pioneers, starting on time at home against an always fast St. Cloud State Huskies side was crucial. Beyond the first shift, the Huskies actually had the better run of play for the first few minutes of the game. They were leading in shot attempts 7-3 with 12:28 left in the first period. After that, for the rest of the game the Fighting Hawks massively controlled possession winning shot attempts 63-26 for the rest of the game. The Huskies tried to replicate Miami’s formula to keep Saturday night close, but to no avail. Throughout the game St. Cloud State was able to get through the neutral zone, but unlike the Red Hawks tried to shoot straight against Adam Scheel.

For the most part he did his job. Arguably Scheel would like the second goal allowed against Nick Poehling back as he got him clean through the five hole, but other than that he was able to square up the Huskies’ shooters all night, only having to make 17 saves on 19 shots faced.

Now we move to the Fighting Hawks. Shane Pinto had a wonderful evening, as he has had most nights throughout the year. He was the beneficiary of playing with Westin Michaud who earned assists on both of his first period goals that set the tone for the game. Pinto and Michaud set the tone for the game. In the post game, when asked about what it means to play with Michaud, Pinto called him an “Energizer Bunny”, which is an apt description given how relentless Westin is on the forecheck and in generating turnovers to provide quality looks for his team.

42 schools were interested in Michaud when he was going through the grad transfer process. 60 schools currently sponsor men’s college hockey. That means 70 percent of college hockey wanted Michaud to play for them, and thankfully for this Fighting Hawks team, he chose to play here. He is able to generate offense in an instant, and plays a similar game to one Drake Caggiula who now makes his living with the Chicago Blackhawks. There is a pro market for the style of game Michaud plays and the turnovers he generated Friday night will be part of his highlight reel for years to come. In terms of generating possesion and quick chances, Michaud has arguably made the biggest impact in getting everyone else to play to their potential just by getting his team the puck back more often.

Going into the finale, we learned some more about this Fighting Hawks team. We know they can score with a lot more regularity than their past two groups could. After last night we know that they learned from the Miami and Denver series regarding keeping teams to the outside and limiting chances. Arguably the most impressive team sequence for the Fighting Hawks was when the Huskies went with the extra attacker. They tried to walk the puck through the middle of the ice to gain entry, but one Cole Smith stood them up at the blue line, and fired the puck in to the yawning cage to provide the final margin of victory.

Saturday night at the Ralph Engelstad Arena will feature a pumped up crowd looking for another series sweep and a desperate Huskies side looking for a split to get their season back on track. If UND can play disciplined hockey and keep gumming up the middle preventing easy zone entries, look for good things to happen at the Ralph tonight.

Donate: To help us cover more games and tell more stories not found elsewhere about all of UND Athletics, please click the below link and consider donating what you can. If you do, I will list you in every story about UND Athletics as a supporter of independent, crowd funded journalism that can truly be free for all at this link: https://www.paypal.me/oliverfrancies your donation will help expand what content we can offer and how many stories we can tell.

Supporters: We thank all of our readers and those who donate, especially Greg and Michelle Livingston.