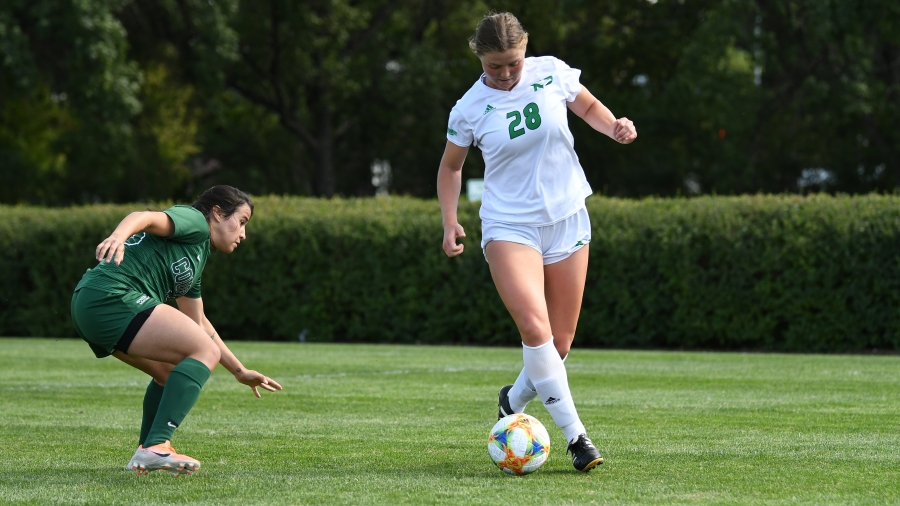 The 2019 UND Soccer side showcased the best iteration of football this team has played since becoming eligible for the postseason in Division One competition. This team had speed down the wing with freshman Bailey McNitt, strength in net with multiple superb goalkeepers, and strong defense with players like Hannah Olson. This team will have some turnover next year, but thanks to the way that underclassmen were utilized this past season, fans should not see too much of a drop off, and if this team can bang home a few more shots, they can compete for a Summit League Championship.

Head Coach Chris Logan deserves all the credit in the world for taking a program that had gone through multiple coaches in not a lot of time and refining them to compete in the Summit League. As we look ahead to the 2020 campaign (if able to be played), we felt it right to look back at some high points of 2019.

For us, we will look first at UND’s 2-0 road win over Grand Canyon University. While ‘Lopes did not finish the season the way they wanted, going just 4-14-1 on their 2019 campaign, they played the Fighting Hawks tough in the desert. Unlike previous years where Catherine Klein had to make double-digit saves on the evening, she only had to make four on the night.

A couple of things stand out about the 2019 team and the future of the program that became evident that night. First, the game winning goal was scored by  Olivia Knox on a header from a soaring Sarah Doran free kick. Knox showed that night that she could not only score, but track back and defend as well. Her development took another step this past year as she not only scored some goals, she played all over the front two thirds of the field. Had she played strictly striker all year, she surely would have potted more than three goals. Knox’s versatility on this night had her all over the field played a key role in limiting Grand Canyon to just four shots on goal.

In addition, that night, we saw a defensive masterpiece from UND’s back line. Throughout the evening they took away quality chances and were arguably lead by a redshirt freshman defender in doing so. Hannah Olson played a superb game in back leading her defenders to keep the Fighting Hawks in the game. In an environment packed with loud fans, the defense of UND had the loudest voice on the evening. Everyone played a part in it, from Mimi Eiden and Bailey McNitt tracking back to provide support, to Olson and others jostling ‘Lopes away from the net. The one bit of blight on the defense that night was Catherine Klein giving a penalty kick foul (on a well interesting call) that she then saved with ease. Had Grand Canyon scored that marker, it could have stolen valuable points from UND as the ‘Lopes were pushing the pace as the game went on.

As we head into the next soccer season, whenever it is (hopefully this fall!), remember this game in UND program history. It wasn’t the most “top-line” win in terms of opponent beaten or the flashiest with one goal scored in the run of play (a Megan Wright Penalty Kick provided the insurance). It was a big road win for the team and showed they could hang in any time of game. One could make the case that without the win against Grand Canyon in the way they did, that their last second heroics against the Coyotes of South Dakota a few weeks later would not have happened. The team had gained valuable close game experience and played with an even keel despite having a penalty scored on them late. That South Dakota win was arguably the difference to this team making the Summit League postseason.

In terms of momentum and program value, the win against Grand Canyon provided top class results for a team and a program that Logan has built into a top-flight contender in the Summit League.

Donate: To help us cover more games and tell more stories not found elsewhere about all of college sports, especially under represented athletes everywhere across the college sports landscape, please click the below link and consider donating what you can. If you do, I will list you in every story about we write as a supporter of crowd-funded  journalism that can truly be free for all at this link: https://www.paypal.me/oliverfrancies your donation will help expand what content we can offer and how many stories we can tell.

Supporters: We thank all of our readers and those who donate, especially Greg and Michelle Livingston