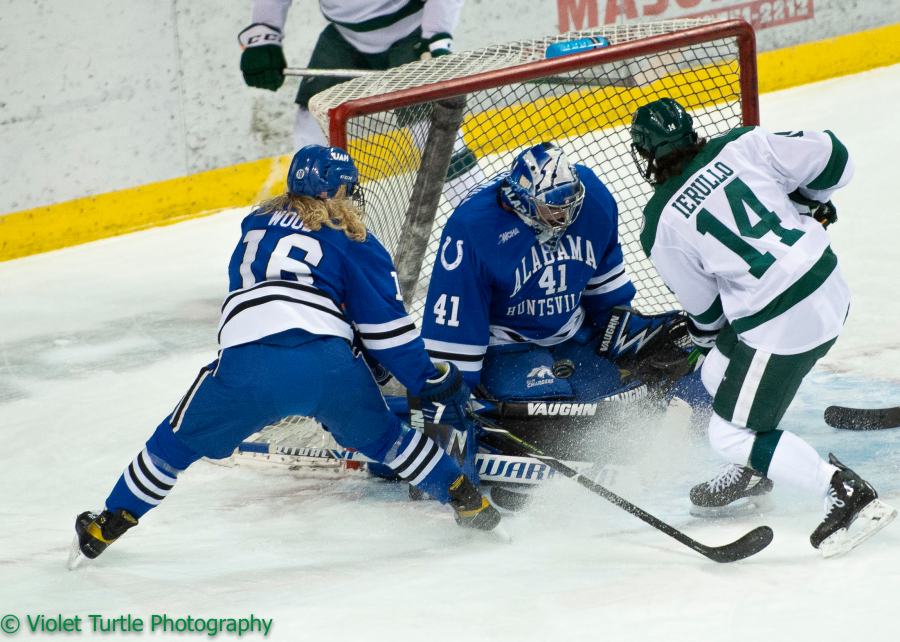 Tonight, the Chargers of Alabama Huntsville came in with 10 forwards, and six defenders ready to take on a Bemidji State team looking to polish its resume as an at large tournament team. The Chargers, after today’s result with Lake Superior State winning, know that another trip to Sault Ste. Marie is in their near future. This weekend is an opportunity for the coaching staff to see different things from this team, and figure out where they stand as a roster heading into the postseason. The finale provides one more chance for a group still developing to pu their best foot forward before the postseason starts next week.

Given this, for the Chargers to have any chance, they had to get going early. They were not able to solve Bemidji State senior netminder Zach Driscoll all evening despite having some good chances early on. The one in the below picture was off a Tyrone Bronte partial breakaway where he nearly lifted a backhand over Driscoll to make the score 1-0.

After this Bronte look, the Chargers had to chase the game a little bit more .Both goals came on the two best offensive zone shifts for Bemidji State. Aaron Miller put home a slot shot after the Beavers cycled the puck for a while. In the second, on delayed, penaltry Brendan Hartris was able to put home the final goal of the night to provide the final margin. In net, David Fessenden was stupendous once again with 31 saves in the effort.

Here are some things that stood out on the night

This team has worked on gamae management all year. That is, staying level and fighting through the waves the other team gets of good momentum and maximizing your own. Tonight, the zone time on offense for the Chargers was a bit better on aggregate, and there’s still more room for growth Tonight is closer to the ideal for this team than some of its recent games. One stand out for this team in terms of consistency and effort is Connor Merkley. The senior forward centered the second line for Lance West’s group and provided a dose of needed physicality behind the net earlier in the game to kick start the offense. It was not unnoticed, and a good sign for this team down the stretch.

If you look at the line chart you will see that on the back end, Brian Scoville and Ayo Adeniye played with different partners for the first time in a long while, The staff is still seeing what it has for the next year, and sometimes that will result in a new look for the series finale. Look for the forwards to move up and down in the line chart,among other things. Credit Bauer Neudecker and Tyrone Bronte for the fire both played with tonight. We would not expect those two to get broken up. The finale gives this group a great chance to put themselves forward as an underdog candidate, how this group responds is up to them.