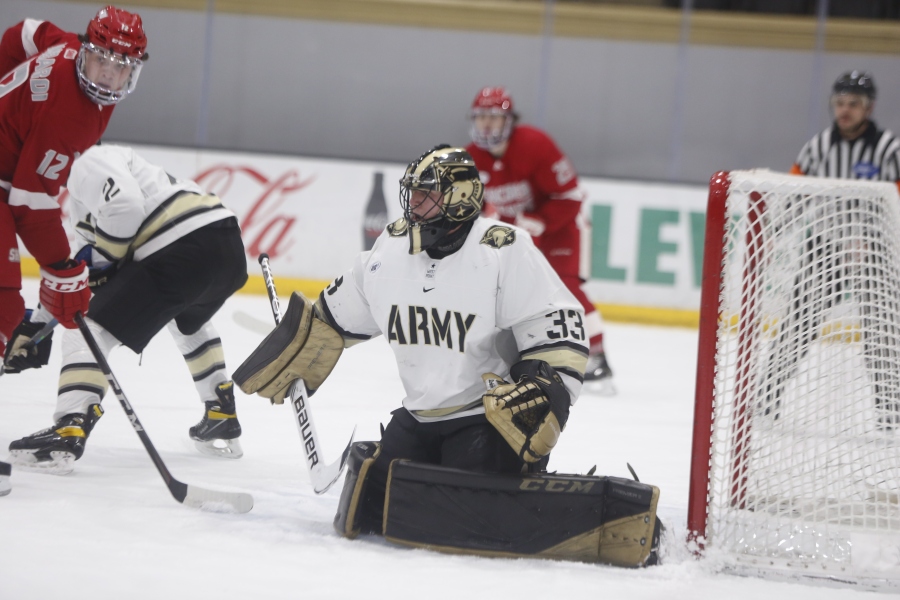 As he often does, Army West Point Hockey Head Coach Brian Riley summed up his team’s 4-3 overtime loss to the Golden Griffins of Canisius College pretty well, thinking in the bigger picture. He said “if this is the worst thing that happens in our lives… then life’s going to be pretty good.” While Riley is of course, incredibly upset that eight of his players, and two cadet-managers have likely participated in their final hockey game as Black Knights, he took the time to talk about this team, and what this year means to him.

First, and most importantly, Riley never loses sight of his own mission, one which he has been a part of for 22 years in some form at Army West Point as either an assistant, or Head Coach, he helps develop leaders to go into the United States Army and lead the sons and daughters of America as members of a team much bigger than what he coaches. He views the lessons learned last night to everyone in his room as invaluable in the long run. As he said. “this is something that will help prepare these guys for their next job.. being officers in the United States Army.”

Keep in mind for the senior class that battled again last night, they do not get the extra year option that all other civilian schools playing Division One Hockey have due to the extra year of eligibility being given due to the structure of the Service Academies. Cadets are on a 47 month journey from civilian to Second Lieutenant. That journey does not pause, or allow for an extra year to play your sport, regardless of circumstances.

Riley has mentioned that this senior class has left the program in a better place than they found it, and regardless of if their last game was played last night, or not, that is true. This class of seniors, combined with emergent rookies put this team on a 13 game unbeaten streak that got them within one bounce in overtime of playing for the Jack Riley Memorial Trophy, given the the Atlantic Hockey Tournament’s victor. The goal of the program every year remains to win the conference and make the NCAA Tournament. They did not win their pod, but they improved to be second behind AIC. This group of seniors lead a rookie class and a program through a pandemic-marred season, finished the regular season and first round of their playoffs on a remarkable run heading into the semifinals, and set everyone else in the program up to rise further, including one day making the program’s first trip to the NCAA Tournament.

As a senior class, this group will know that their last memory of hockey at Tate Rink came with a triple overtime win over Sacred Heart in the longest game in their program’s history. The leadership this group showed through the face of adversity will prepare all of them for their service, and may be another building block towards an NCAA selection one day. That is something that no result, no cruel bounce, and no selection process can take away from them.

(Note: This article is focusing on the historic effort put forward by the Black Knights of Army West Point, and the positives in this historic season for Brian Riley’s group… in a year of uncertainty with how the Selection Committee will choose the field of 16 teams for the NCAA Tournament, we will leave any thoughts on the bracket to be put up on this site until after all conference championship games are played.)