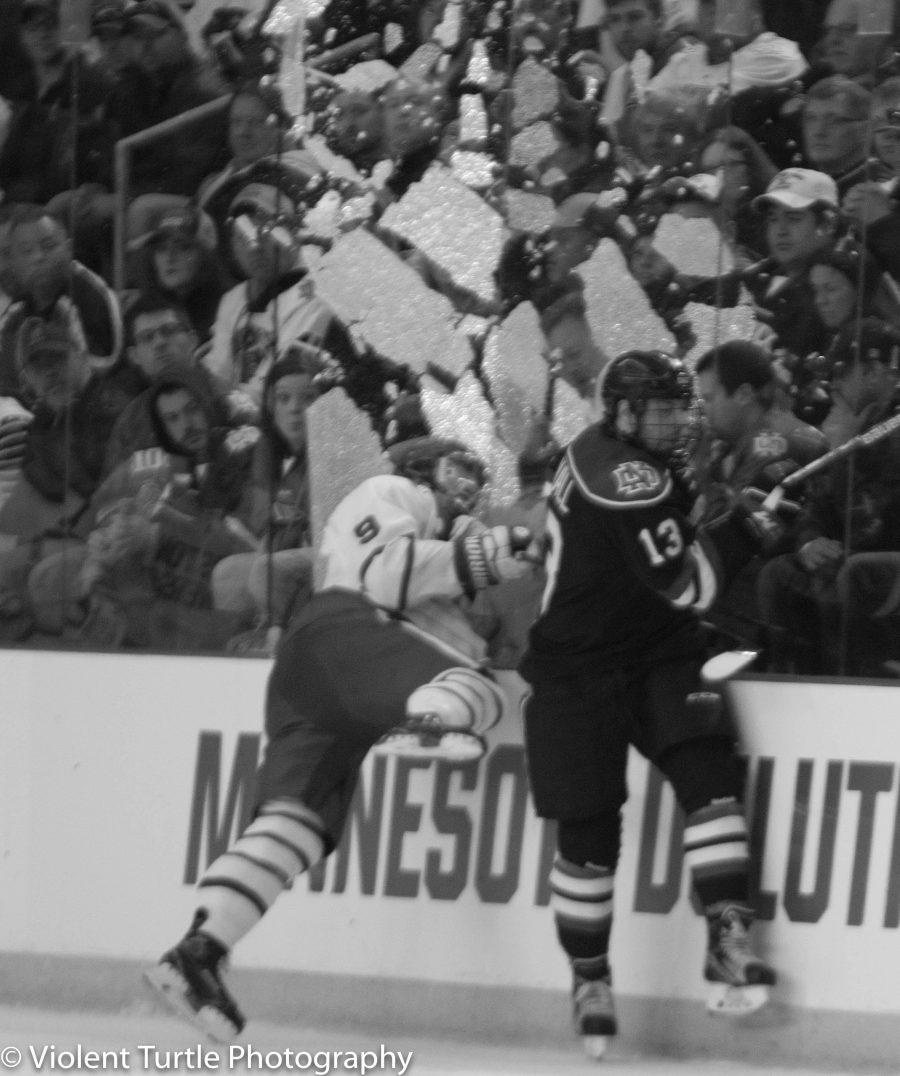 On March 24 at Scheels arena, UND came up short against the Boston University Terriers 4-3 in double overtime. Charlie McAvoy found the back of the net on a perfect cross-crease pass from play maker extraordinaire, Clayton Keller. Boston won this game thanks to its superb defense and outstanding job limiting UND second chances. The Fighting Hawks won the shot attempts battle 145-67, yet the Terriers blocked 51 of those shots and UND missed 33 of them. North Dakota was done in by a strong Boston effort on the back end and timely transition opportunities. Jake Oettinger played a great game tonight. The freshman netminder for Boston never looked out of position and made several key saves to allow the Terriers time to survive the constant UND pressure.

The first period featured a series of back and forth exchanges. Both sides had their chances. As the game wore on, Boston’s speed was on full display. Cam Johnson had the first big save on a small breakaway from Kieffer Bellows.

17:04 in the first, Joel Janatuinen fired a pass to Rhett Gardner who used his long reach to put the puck in the net around Terrier netminder, Jake Oettinger. This goal is Gardner’s eighth tally of his sophomore season.

Boston University had some chances the rest of the way, but it remained a 1-0 game for UND after the first period.

2:05 in the second period, Doyle Somerby found the back of a wide open net to tie the game up. UND had chances throughout the rest of the period, but could not convert. Every time it looked good, Oettinger made a key save or UND missed the net.

Early in the third period, Bobo Carpenter took a superb setup from Clayton Keller to fire a puck past Cam Johnson and stake the Terriers to their first lead of the contest.

04:24 into the third period, Jakob Forsbacka Karlsson put a puck past Johnson to give Boston a 3-1 lead. UND looked tired at this point.

After a 14 minute delay  due to a pane of glass shattering thanks to a nice check by Mike Gornall, UND came back to tie the game thanks to goals from Ludvig Hoff and later by Christian Wolanin. That was the score until the McAvoy marker in the second overtime period.

In the first overtime, Dixen Bowen looked to have the game winner, however after an inordinately long review UND was determined to be off sides and the goal was waved off. This goal was overturned thanks to a sky cam like angle from the opposite goal end.

The Fighting Hawks have not lost to a team other than Boston University in the postseason since 2015. The challenge for UND is trying to retain as many of its underclassmen as possible as the Fighting Hawks bid farewell to seniors Matt Hrynkiw and Gage Ausmus.