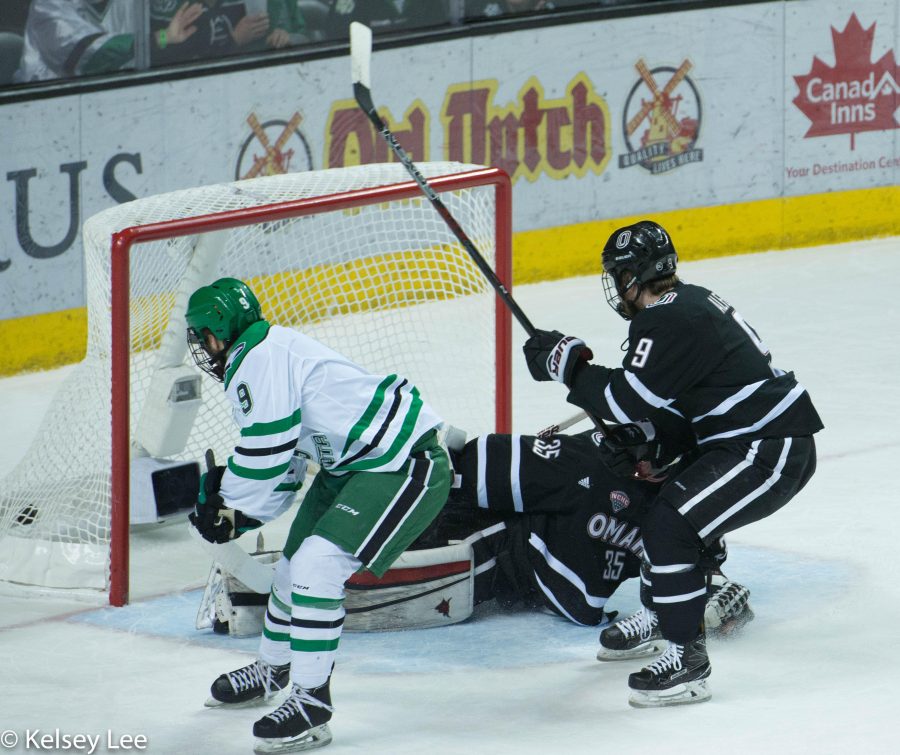 53 seconds into overtime, the bank was open for the University of North Dakota. Forward Nick Jones picked up the overtime winner for the Fighting Hawks off of Omaha goalie Evan Weninger. Jones tied the game for UND in the third period on a redirect past a screened Weninger on the power play.The junior forward took a rebound from a Jordan Kawaguchi shot, and used the positioning of Weninger to his advantage.In addition, that goal provided Kawaguchi with his first collegiate assist. His two tallies provided the difference for a UND side that needed a spark after giving up another two goal lead. The Jones tally sent 10351 fans at Ralph Engelstad Arena home happy.

This sweep in the NCHC First Round keeps UND’s hopes for the NCAA Tournament alive. They still have more work to do. The only thing this win guarantees the Fighting Hawks is two more games next weekend. It also showed that UND can come back from deficits, and that its experience in numerous overtime games helped equip them for tough situations like tonight.

After a long review it was determined that Matt Kiersted opened the scoring 10:13 into the game as he just squeaked the puck over the goal line before Weninger pulled the puck out of the net.

A few minutes later Bowen took a feed from Trevor Olson and walked in on breakaway. He went forehand-backhand to put the puck past Weninger 14:05 into the first.

The Mavericks answered right back as  Teemu Pulkkinen redirected a powerful Lucas Buchta wrist shot past Cam Johnson 15:28 into the first. UNO got its first goal in its last six periods. on that tally.

Pulkkinen would strike again in the second period, and tie things up for the Mavericks. UNO fought back from the first period and played UND even throughout the second frame and into the third period. In the third stanza, Jake Randolph gave UNO the lead 5:41 into the final regulation frame.

Nick Jones would score the first of his two goals on a redirect past Weninger. Jones’ net front presence made it impossible for Weninger to see the puck. The score would remained tied for the final 9:46 of regulation time.

UND will await the results of the Miami-St. Cloud, and Colorado College-Denver game threes tomorrow. These results determine UND’s opponent on Friday in St. Paul.  The Fighting Hawks still have to win at least one if not both games depending on their opponents next weekend. In addition, UND cannot cough up another two goal lead, this habit has cost them games and almost hurt them tonight.