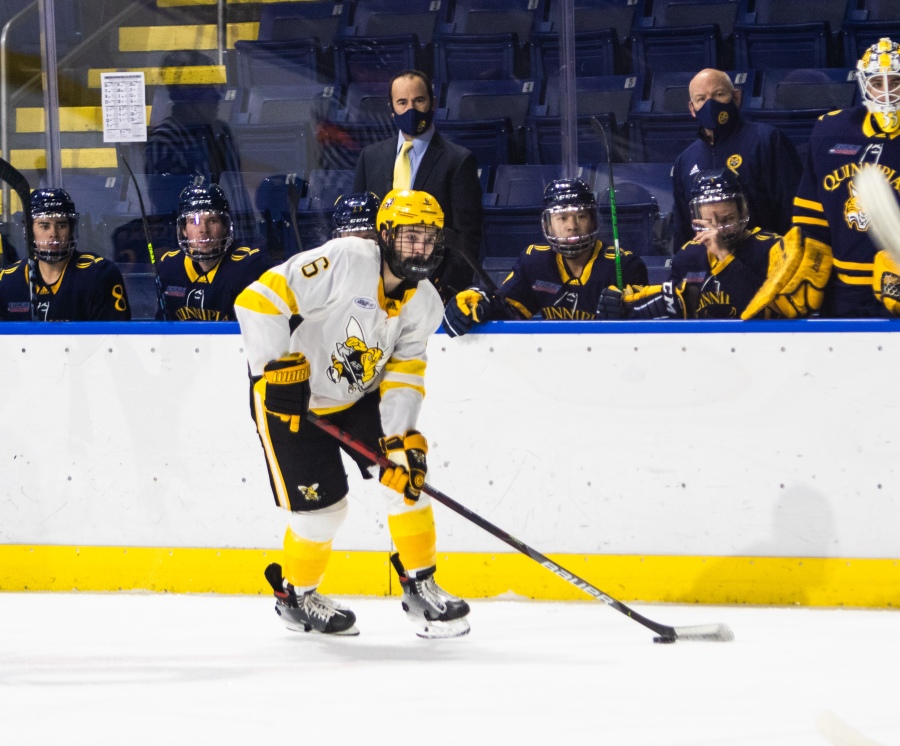 Head Coach of the American International College Yellow Jackets Hockey Team, Eric Lang has had a lot to work through this week as his team prepares to play in the Atlantic Hockey Association semifinals this weekend against an upstart Niagara team. Lang and his group have not sat back, and have focused on honing as much of their game as they can. The Yellow Jackets go into this weekend as the number one seed after being the best team in their pod, and the best team in their conference for the third straight season. Lang’s group is not the underdog this weekend, but his group is filled with players who are, whether through transferring from club hockey like Elijah Barriga, being overlooked like Aaron Grounds, or several others that came to Lang’s group because they saw a chance to develop.

This past weekend, to stay fresh, due to their big roster, and to give coaches more chances to evaluate things at a game like speed, Lang’s group split into two teams complete with three lines and two goalies per side, and played two intrasquad games, where everything was designed to mirror the game day experience. Lang was so detailed in setting this up, both games included a full pre scout for his groups, warmups complete with music ,and he even had his equipment staff setup the pucks in the exact same way they would be for a normal game. The game was also broadcast, and everything about it, besides the opponent of AIC, was to be authentic as possible. Over the two games, several players stood out, including Stefano Durante, who put up a shutout in the second game on the weekend. Lang mentioned the success of several other players, including Chris Dodero, Tobias Fladeby, and Brennan Kapcheck. He noted that all of the group his staff will rely on this weekend had a good series last weekend. As Lang said of last weekend’s work, ” I feel good about the weekend we just had.”

With the past in mind, Lang knows the reality of the season. He said plainly, “every week you’ve got two opponents, Covid and the one coming up.” As for getting ready for the Purple Eagles of Niagara, the challenge for Lang and his staff will be, as he said “finding the balance between what’s important in terms of what we need to put in front of our guys in terms of what Niagara’s doing and focusing on what we are doing.” Lang singled out some of the stars on the Purple Eagles like Ludwing Stenlund, Walker Sommer, and several others as players to watch this weekend. The Purple Eagles are incredibly opportunistic, and Lang knows that dealing with that will be one of his biggest challenges. The Purple Eagles scored first in all three of their games against Robert Morris, and as Lang said,” I really appreciate that Niagara team, [in part because] they’ve played the most games short handed.” The team Lang’s group is facing has a superb goaltender in Chad Veltri, and a very physical defense to compliment the rush style they play.

Lang also commented on the AIC program he has built regarding his ability to recruit and continuously have a big roster with which to compete. He said on why players are choosing his program that “our players are having a great experience.” This is through the culture of finding players to fill out a full roster that want to be a part of a program that focuses on development and building a good atmosphere, Lang recruits starting with the character of who he brings in, which in turn lays the ground work for a good culture. When the culture, meets good systems, and good facilities, as Lang said of what his staff has done ” we make the rink fun.” In addition, the culture and systems meld, and eventually the program can become successful, like his is, and it perpetuates at that point with ” players recruiting other players.”

On the weekend, Lang is proud that three of the teams in the semifinals have some relationship to their former boss, Army West Point Head Coach Brian Riley. Of playing against Riley, which fellow former assistant Trevor Large has to do in the semifinals with his Canisius Golden Griffins, Lang said its, ” kind of like playing against the Godfather.“ Lang watched the triple overtime thriller that the Black Knights won and said “the longer that game went .. the better shape West Point was going to be in that night. ”On the tournament and Atlantic Hockey, Lang was rather blunt, saying “to take a team one or two or three games over .500 over Army is an injustice.” Given the uncertain year, he is a proponent of looking at how teams played down the stretch, and paying attention to how they finished. Given that both teams, Army and AIC, have not lost very much (AIC has one conference loss this year, coming on January 10 to Army West Point), and that Army is unbeaten in regulation in its last 13 games (12-0-1), he hopes that how teams have played down the stretch. As Lang said of this metric “our criteria should be how you play down the stretch and they’ve done it better than any team in the country. “

To wrap things up, Lang praised the role of freshman fourth line standout Aaron Grounds , saying “Grounds is one of these guys.. he’s like a tireless energizer bunny type player. He’s a cheerleader on our bench. He’s a fresh dose of Vitamin C everyday, and he’s a pretty good player too.” In addition he praised the growth of Jake Stella into one of the more reliable defensive forwards on this deep team and his ability to win faceoffs in key moments.

For the weekend, Lang’s outlook on his group, the team he faces, the tournament he is in, and the conference he is a part of (regarding their ability to potentially earn two spots in the NCAA Tournament), arguably comes down to this simple quote, on what all four teams in Springfield, Massachusetts will deal with this weekend. Lang simply said “pressure is privilege.”

3 thoughts on “Eric Lang on AIC’s preparation for the AHA Semifinals, Atlantic Hockey getting two bids, and more”