Undrafted Free Agents to watch at the 2021 Fargo Regional

This week, we will see four teams converge upon Scheels Arena in Fargo North Dakota to faceoff for a trip to the 2021 Frozen Four in Pittsburgh in a couple of weeks. These teams all have top end talent, and people we will see in the NHL one day. Each team has more than one undrafted free agent worth noting, and we will discuss four undrafted free agents to watch that should have an immediate impact in professional hockey. We selected one from each team to discuss, that we will be watching this weekend.

The winger from Asker, Norway has nine goals and 17 total points on the season. Along with his goal scoring prowess, he has proven the ability to do it against the two best teams AIC has played. four of his goals have come against Quinnipiac (2), and Army West Point (2). Head Coach Eric Lang and the staff at AIC love his release and ability to get to key areas of the ice and find the back of the net. If he does not return to AIC, he up front, and Brennan Kapcheck on defense are two of the quietly more popular undrafted free agents on the market that have the speed and skill needed to make the NHL. Fladeby’s greatest skill this past weekend was his off puck awareness. That is, he knows where to go on the ice to get himself space. For AIC to shock some more people in Fargo, he needs to make his presence known this weekend.

If the goaltender decides to go pro, the NHL may be ready for him now. As ESPN Color Analyst for the Fargo Regional, Dave Starman said of what Mann’s game involves, saying that he is. “athletic, aggressive depth, good stick down low, most importantly he is always square to the puck.” He praised how big the 6 feet tall Mann plays, and noted that he reminds him in style of Byron Dafoe. Mann is the Big 10’s Goalie of the Year and a deserving Mike Richter Award Nominee, his ability to keep the Wolverines in what promises to be a close game against the reigning back-to-back national champions, Minnesota Duluth. For all of the star power the Wolverines have, from their numerous high-end draft picks to players that will be drafted in the top 10 this summer, Mann has been the key to this group. If the Wolverines can defeat the Bulldogs, and earn a trip to the Frozen Four, Mann will be a big part of that. His style of play, and fundamental skill lends itself well to the next level, and he should have offers to choose from this summer. If we returns to Ann Arbor, he will have two years of eligibility left.

While Roehl is not the offensive defender that fans of the Minnesota Duluth Men’s Hockey team have been lucky to see in Dylan Samberg or Scott Perunovich, he plays the game the right way, and is superb at making life tough for the skilled forwards he sees on a nightly basis in the NCHC. As we said in our NCHC preview of Roehl “A responsible defender with improved skating to compliment his high hockey IQ, this 5-foot-10 senior may not possess Perunovich’s point-producing upside, but he makes up for it with solid play in his own end. Roehl can be counted on to maintain a slot presence and keeps loose pucks out of harm’s way or show poise under pressure when a line change is in order. Roehl is not flashy by any means, but he should be an intriguing long-term option for an NHL club in need of a mature defensive defenseman at the AHL level.” If Roehl can develop and earn his way up in a system needing veteran leadership, he could work his way to an NHL job within a few years. For now, his calmness under pressure, and ability to make the life of scoring forwards he faces quite tough are two things that the Bulldogs will need as they look to advance to the Frozen Four. 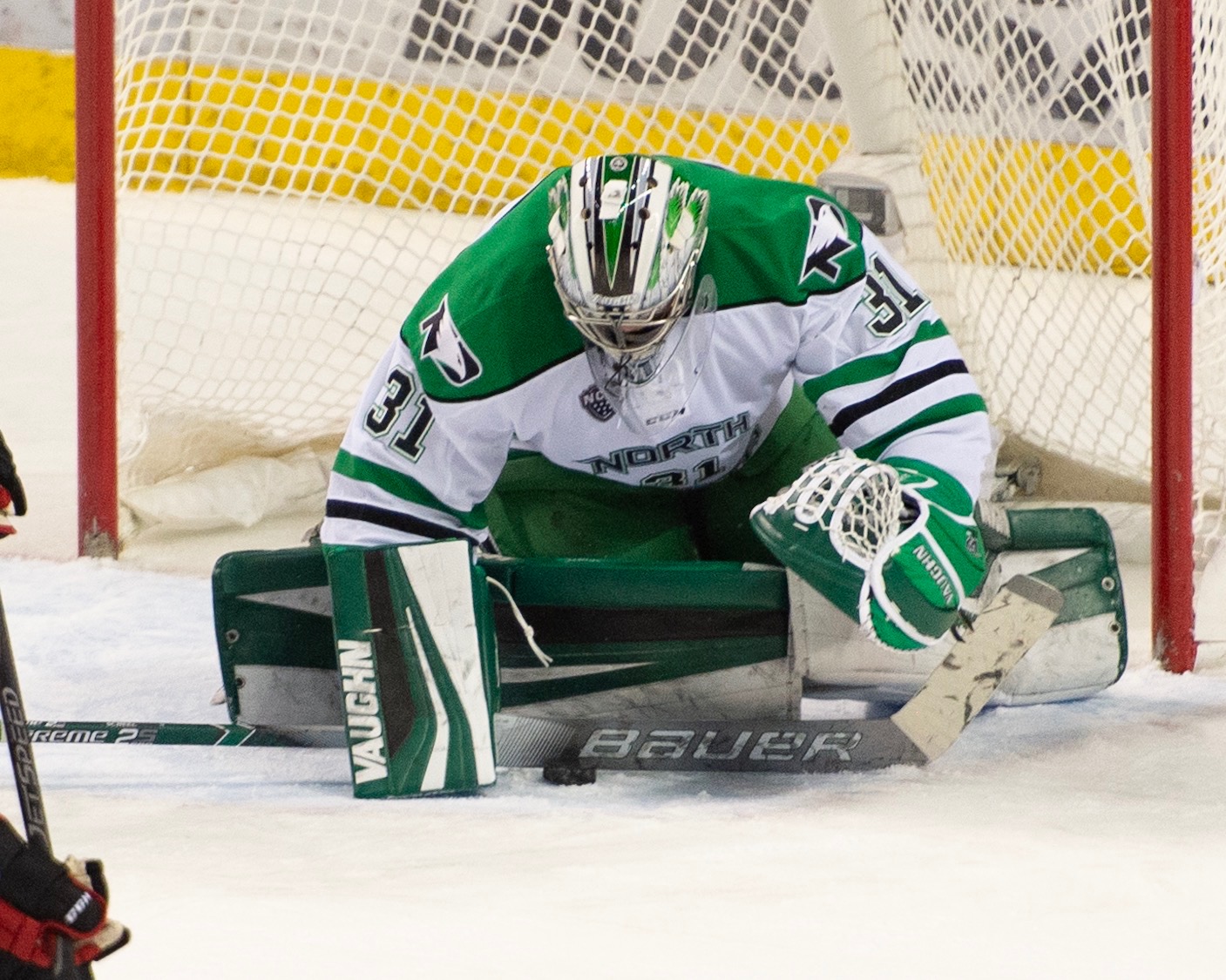 For the Fighting Hawks Men’s Hockey team, they are blessed with two goaltenders in Adam Scheel and Peter Thome who are both capable of playing professional hockey. One of them, Adam Scheel, has wrested control of the net all for himself most of the season, and its not hard to see why. The Lakewood, Ohio native has gotten considerably better at maintaining his positioning throughout the game. His biggest improvement is not so much his positioning, but in how he plays the game. That is, he rebounds quickly from goals he allows, and lets the number one team in front of him find a way to get the goal back. Regardless of what he chooses to do, he will most certainly end up at an NHL development camp this summer, and he may earn a contract pretty soon after UND’s season ends. Teams that get athletic goaltenders that know how to manage the ebb and flow of a game, typically like what the see. The Lakewood, Ohio native has all of those traits and more. His ability to manage games is one reason why the Fighting Hawks have a strong enough team to earn their ninth NCAA Division One Men’s Ice Hockey National Championship this season.

Whether you are a business who likes outlets that promote unique stories in hockey, or a person who just wants to chip in what you can, the donate here link is the place to click.

Or enter a custom amount