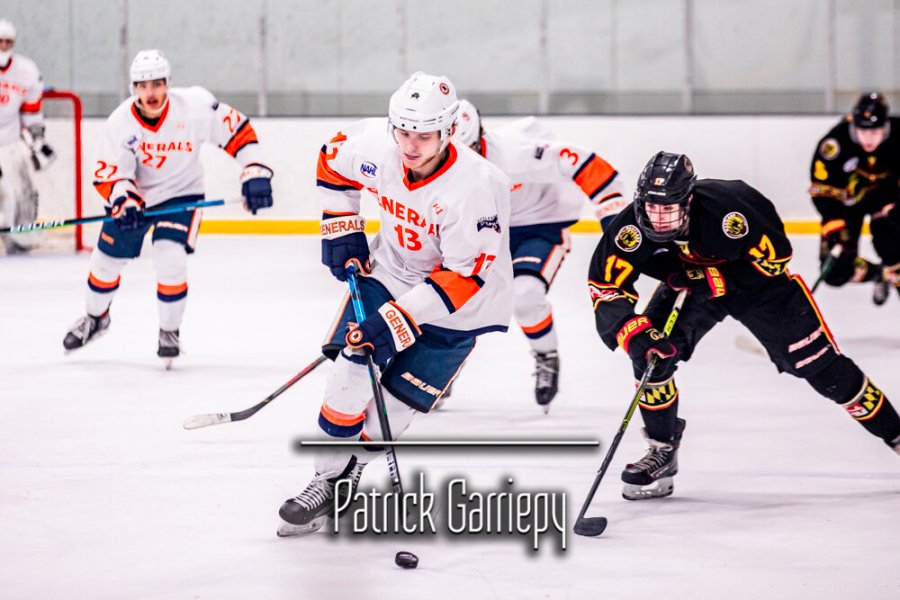 The Northeast Generals of the North American Hockey League have to elevate their game. They are on the outside looking in for a spot in the Robertson Cup playoffs this spring, and have begun to elevate their game to a playoff level. A team that played 27 straight games on the road, finally got to play in front of a small home crowd at the New England Sports Village against another battling team, the Danbury Junior Hat Tricks 8-3.

For Generals Head Coach Bryan Erikson, the line with Jonathan Young on it was his best. David Andreychuck put home two goals, Johnathan Young also added one, and was, for Erikson the best player on the ice. The team is currently running a #CommitJYoung campaign to implore the Division One schools in need of a power forward with the ability to put up points in bunches. He lived up to the campaign tonight, and has plenty of accolades in his NAHL career to merit more consideration.

As Erikson said ” To me Jonathan Young was the best player on the ice. And he has been for a while. He plays so hard every shift, hits, kills penalties, and scores. He is a great skater has an NHL shot. We feel we have a few D1 kids on this roster that aren’t committed but Jonathan Young is an absolute stud that is not only a D1 hockey player but a very GOOD D1 hockey player. Our kids have success at the next level that is proven. He will be no exception.”

Of his team, they have begun to gel recently towards the end of their time playing 27 road games in a row before returning home. They have come back a couple of times as they did tonight, going 2-0 down before putting home six unanswered goals on the road to their 8-3 win.

Erikson kept it simple and said ” I just think we are becoming more mentally tough. It’s been a long year with road game after road game. Guys are still bought in completely and we just focus on the next goal. That is all we ever talk about. The next goal.”

Of Rickey Boysen and Andreychuck, the Generals with two goals, Erikson said ” Ricky Boysen has been great for me for 2 years. Had a short handed goal and a power play goal , just an absolute gamer. Battled injuries this year and just keeps going. Finishes hit, blocks shots, you name it he does it. David Andreychuk is a very very good hockey player. Smooth, works hard, tons of skill and great vision.”

For tomorrow, the Generals will have some things to work on, these are areas of improvement the staff will focus on, according to Erikson who said of what needs to improve,” Discipline. We need to be more disciplined in our forecheck, in the D zone and in the neutral zone. I thought we were sloppy. I think we need to focus on the small things and we will have success. We have 7 out of 8 points in our last 4 games. Trending in the right direction and just need to stay focused on the little things.”

Regardless of the improvements, which Erikson and his staff will stress, the growing strength of this team is clear. Saying that a group is focused only on the next goal is often considered a cliché. Erikson’s group has bought into that in a year with so many things going on, in the middle of the pandemic. They are all truly focused on the next goal, which is beating Danbury tomorrow night.