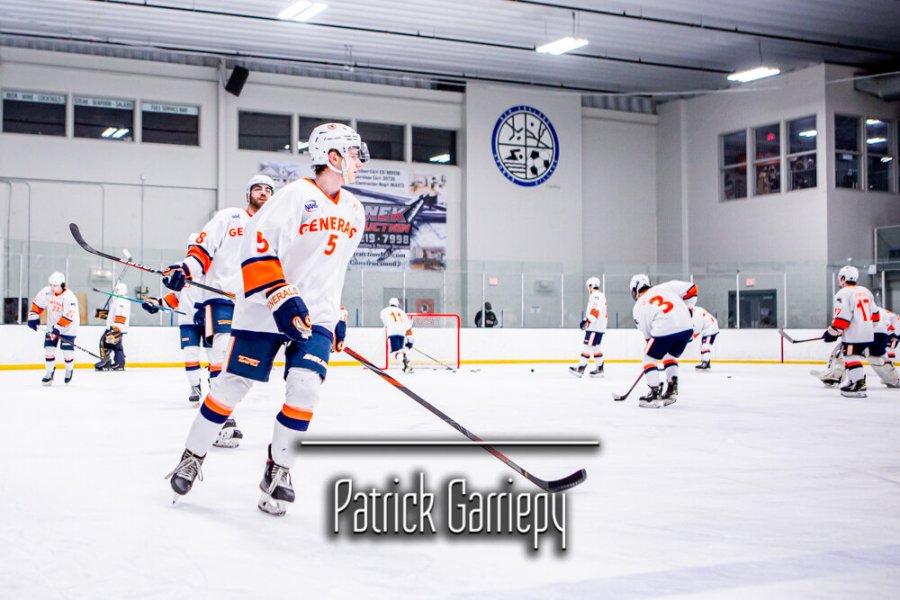 Last weekend, on Saturday night especially, the Northeast Generals scored the first two goals, and looked to be on the right path for points, before the Danbury Junior Hat Tricks answered back with eight goals to roundly hand the Generals a loss.. On Saturday, the Maryland Black Bears scored first, but that did not deter the Generals as they fought to earn a tie, and get one point on the weekend

Head Coach Bryan Erikson summed up the 3-2 shootout loss and the weekend pretty well in saying the following.

“I have absolutely loved the way we played the last 2 nights. We didn’t score last night but I though we still played an outstanding last 50 minutes. And we brought that into tonight. We played very hard and very well. But ran into a hot goalie. Points are big but wins are more important. But I’ll take playing well any day. Just need to continue to build on the positives and clean up the mistakes and we will be fine. ”

The two Generals goals from the finale came on effort plays in the second period. First, Tyler Cooper made a fantastic inside move on a two-on one and put home the first goal of the evening. Later in the frame, Matt Boczar rifled home the second tally on the evening capitalizing on a turnover caused by Ricky Boysen of Black Bears’ netminder Michael Morelli behind the net. As Erikson said of the two goals.

“Both goals were nice. Cooper had a great goal. He is so good when he keeps his feet moving and that goal was a direct result of just that. He can affect the game in so many ways and that goal was a nice reward for a lot of hard work. And Boczar did what he does. Outworked people after a great play by Ricky Boysen. Great goals.”

In net, Hugo Haas had another good night in net for the Generals, making 29 saves in the finale.

” Hugo made some huge saves. Didn’t love the first goal and I know he would love that one back. The 2nd goal can’t happen but isn’t on him. We can’t give up 2 on 1’s with 3 seconds left in a period. It’s just a mentally soft play by the guys on the ice and by me of not being aware and having the right guys out there to close out a period strong. And then in the shootout they made some great moves and scored. Hugo is the best.” Haas kept the team within striking distance all weekend, and has continued to help the group battle for a playoff position.

While every General wanted four points on the weekend and came away with only one, Erikson remains upbeat for his group heading into next weekend as they will face the same Black Bears for two games at home.

As he said on what to work on this week, as they get ready to face Maryland at home, “work on traffic to the net. Work on taking the goalies eyes away. And just having fun. The game is supposed to be fun. And I think everyone plays better after a fun week, looking forward to coming to the rink. Happy to see the boys and play hard for the guy next to you.”

As for the players finishing their junior hockey career this season, Erikson is upbeat about their continued work and effort. He added, “our 2000’s have really stepped up their play. They have all played for me for multiple years and I just love them as people. I am so proud of who they are and how hard they are working. Just want them to leave it all on the ice the last 10 games and have no regrets no matter what happens with school and I think you saw that this weekend.”

With that, the Generals have ten more games in their regular season to put together a possible run to the playoffs. More importantly, they have 10 more games in the regular season to showcase how far they have come as a group this season, as one of the most active clubs with player transactions in junior hockey this year, this team is starting to come together. The final 10 games being meaningful regarding the playoffs, and Erikson seeing how far this group has come this season, are all bonuses for the needed moves made to get the Generals to this point. What happens next will be well worth watching.