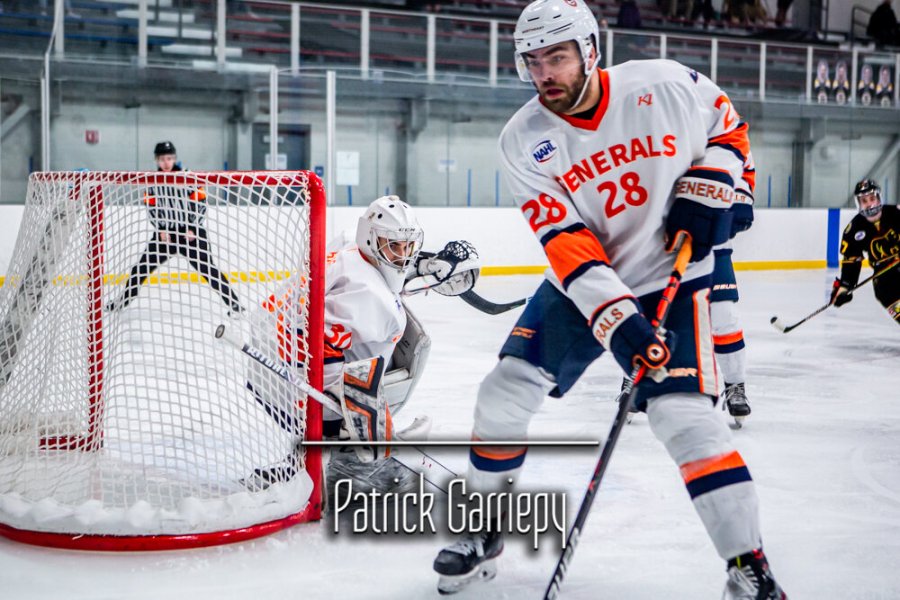 Tonight, the Northeast Generals had a chance to take two points from the team ahead of them in the standings, the Maryland Black Bears, and stymie their six game win streak. The Generals put together three solid power play goals on a reworked power play unit, with a new strategy that looked to be the difference. Late, leading 3-2, the Generals gave up a breakaway that proved to be a fatal blow to taking two points from the Black Bears in regulation. In overtime, Maryland put home the game winner to take the extra point.

Head Coach Bryan Erikson had some good and bad to say on the evening.

On the revamped power play, which was a point of emphasis for the team heading into the weekend he said

” We worked on the PP a ton this week, new scheme new guys and I like the way they ran the plays. Good job by the boys and I hope we build on it.”

On the night itself, he went on to describe the good on a night where the Generals controlled large swaths of the game but could not find an insurance marker to reinforce their tenuous lead in the third period (the Black Bears scored three goals between the third and overtime to win the game).

” I think 5 on 5 our forecheck was excellent. They made some adjustments and we did too. I just think we need to continue to build on the good and have short memories about the bad.”

To beat the Black Bears tomorrow, Erikson noted how well they have played over their seven game winning streak, and some things to watch for tomorrow afternoon. On what Maryland has been doing well, he said the following

They were, “playing hard, getting puck luck, creating chances for themselves and finishing. That tying goal was a clinic in how to execute an odd man rush.”

On the night, to the good, Erikson complimented a couple of his skaters, saying

” I thought Ryan Gordon was our best forward. Played real hard, finished hits, won puck battles. And Jackson McCarthy was very good at the back end and really affected the play.”

Going forward, Erikson was blunt about the final result from tonight, referencing the turnovers that sprung the Black Bears on the two goals that tied things up in the third, compared to the rest of the evening where the Generals outplayed Maryland.

” Unacceptable mistakes can’t happen at this point of the year. We controlled the game and had no business losing.”

Erikson is a big proponent of accountability and owning his own mistakes, while encouraging his team to own theirs. Tonight, the simple mistakes made in the third period cost the Generals a regulation win against a team they need to win as many points possible against (Maryland is ahead of the Generals in the East Division standings). The team seemed to get better looks tonight than they did either game last weekend against this same team. Like many college hockey players have told us, you cannot take a shift off, or write off mistakes at the NCAA level. The same holds true against Maryland. Two Generals’ mistakes ended up in their net behind Hugo Haas who had another quietly solid evening for Erikson’s group in the saves he made, and in how comfortable he was making them. Tomorrow afternoon Erikson’s group gets another opportunity to show what they’ve learned in this tumultuous season, at home, as they try to get three of four points from the Black Bears this weekend. Tomorrow’s a new day, and the group lead by Erikson and General Manager Matt Dibble has a sparkling opportunity in front of them to get 75 percent of the points on the table this weekend. If this team can carry forward the effort shown tonight, with some of their power play success, tomorrow night they can own a late-season win, and head to their next round of games in a slightly better position in the playoff race.