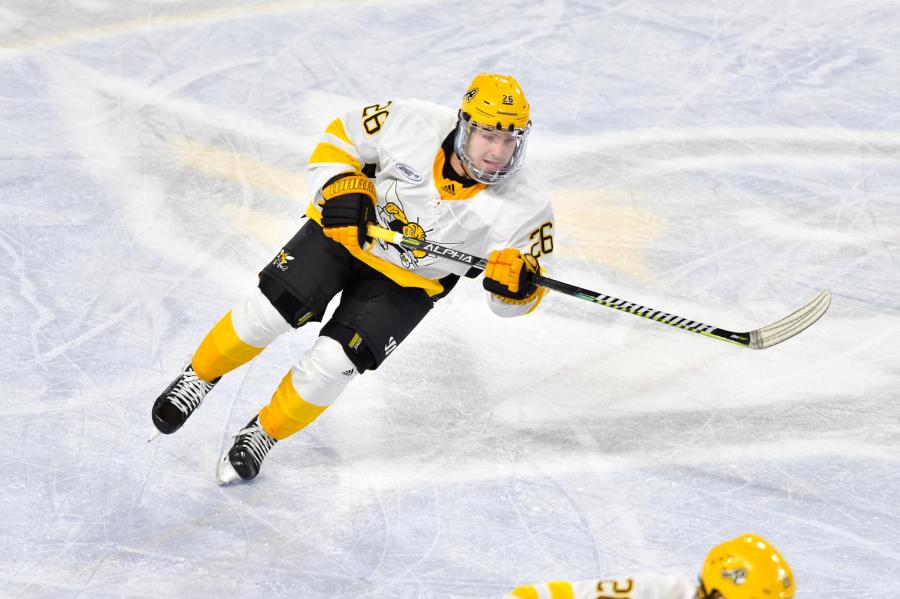 The CCHL is where Beaconsfield, Quebec native Chris Theodore gained confidence against older players. He had to challenge himself against tougher competition and against older players. Throughout his hockey life, he has gotten better at the next level playing against players who are older than him. His speed, and high hockey IQ, combined with improved defense are some of the best things about his game. Theodore did not know much about the college hockey path until he went to a junior hockey showcase with Mike Towns being the first Yellow Jacket to talk to him. The now Associate Head Coach of the program saw him at a CCHL showcase, and got to come to campus and talk with Head Coach Eric Lang . Lang and the coaching staff got him to come to AIC because of the closeness of the team. ” I truly was like this program is going the right way and this is something I want to be a part of.” On the AIC family, ” you really have 35 brothers.” As a leader, Theodore tries to keep things light, and mentors players wherever he can. Chris Theodore and Chris Dodero take rookies under their wing and mentor them and help get them adjusted to college life. As Assistant Coach Cory Schneider says of Theodore ” Chris has an outstanding attitude, cares for his teammates and is always smiling. We call him a dose of vitamin c for our locker room.”

Theodore credits Lang and the staff for helping him improve his defensive skills over his time at AIC. Angling and making the right reads are two of the big things that Theodore has improved in his time at AIC. As of now, Theodore expects to use the extra season to continue to grow his game. On the culture of AIC,” every day in practice you know there’s someone who is gunning for your spot.” Theodore’s uncle, Jose Theodore played the game in the NHL and inspired him to get involved. Growing up, Theodore wore Patrick Kane’s jersey around the house and went so far as to tape his stick like Kane does. He tries to model his game after him as an undersized forward with a nose for the net. Schneider added that Theodore’s best on ice traits are ” Chris’s ability to control the puck at high speed, draw players to him and find an open teammate.” These traits were on display in the Atlantic Hockey Championship against Canisius last year when, as Schneider said, “last year in the Atlantic Hockey Championship, Chris stepped up and scored what proved to be the championship clinching goal in the third period against Canisius. He had to pick the puck up with his feet and kick it to his stick before scoring and was a great example of his high end skill in a pressure moment.”

Off the ice, Theodore is a business major planning on coming back to get his MBA next year as of right now. One day he would like to be an agent or on and off ice trainer kind of similar to Chris Dodero, an early working concept is “Theodero (a working concept).” Theodore has big goals, and knows AIC is a huge part of them. He is thankful for everyone around him, and takes pride in being part of the AIC Family. Chris is a mentor like his friend Dodero, and the long term potential for his career is unlimited. He already has pro teams asking the coaching staff for more info on him, could earn a development camp invite this summer if he continues his strong play from a season ago, and still has this and next year to grow as one of the leading elite humans Eric Lang can count on in the big moments.

As to one thing he wanted to say on AIC’s success and wishing the team got more notice:

” I just want people to start recognizing that we’ve beaten some top-notch programs, we’re probably the only team in the past couple of years that has three conference championships in a row.”

Donate: To help us cover more games and tell more stories not found elsewhere about all of college sports, especially under represented athletes everywhere across the college sports landscape like unique untold stories across college hockey. Please click the below link and consider donating what you can. If you do, I will list you in every story about we write as a supporter of crowd-funded journalism that can truly be free for all at this link link:paypal.me/Seamorepsorts.